For most people, moderate alcohol use is not considered harmful. However, alcohol consumption in general is associated with a variety of short- and long-term health risks, such as vehicular crashes, violence, sexually risky behaviors, high blood pressure, and various cancers, including breast cancer. The risk of these harms increases as the amount of alcohol consumed increases.

It’s important to note that “one standard drink” means 1.5 ounces of liquor, 5 ounces of wine, or 12 ounces of beer, because each contains 0.5 ounces of alcohol. 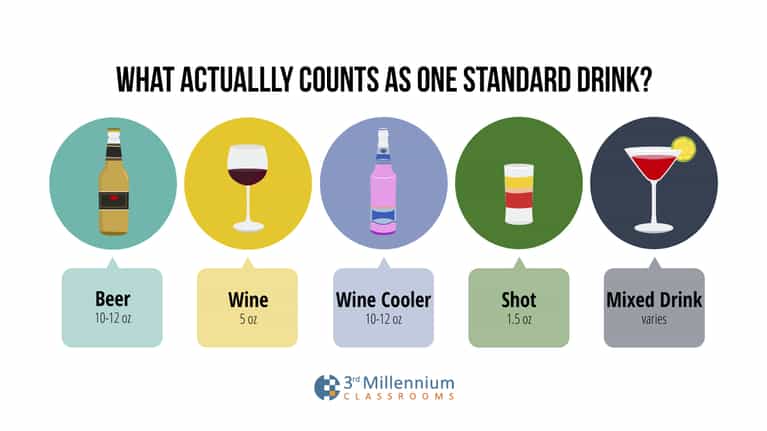 These guidelines do not recommend drinking every day and do not recommend that individuals who do not currently drink start drinking for any reason. In fact, the guidelines make clear that, in the case of alcohol consumption, less is better than more. Yet two in three adult drinkers report drinking above moderate levels at least once a month.

Many adults and even young people consume alcohol excessively, leading to an increased risk of health problems and the potential for negative consequences in their own lives as well as those around them. This type of drinking, which is sometimes referred to as “binge drinking,” significantly increases the risk of short-term harms, such as injuries, as well as the risk of long-term chronic health problems, such as some types of cancer.

Ethyl alcohol, or ethanol, is an intoxicating ingredient found in beer, wine, and liquor. Alcohol is produced by the fermentation of yeast, sugars, and starches.

Why do some people react differently to alcohol than others?

Alcohol affects every organ in the body; it is a central nervous system depressant that is rapidly absorbed through the stomach and small intestine into the bloodstream. Alcohol is then metabolized in the liver by enzymes. However, the liver can only metabolize a specific amount of alcohol at a time, approximately one standard drink in one hour, which leaves the excess alcohol to circulate throughout the body. The effect of alcohol on the body is directly related to the amount consumed.

There are other physical factors to take into account. For instance, a person who weighs 150 pounds is going to react differently to three alcoholic drinks than a person who weighs 250 pounds. There are a number of factors that can affect alcohol metabolism, including birth sex, weight, and time spent drinking.

What is excessive alcohol use?

What types of treatment are available for high-risk drinking?

There are many different types of treatment available for high-risk drinking, from individual and environmental interventions to more intensive behavioral therapies.

A large body of evidence shows that both individual and environmental interventions can be effective at preventing alcohol-related harm. For example, among college students, a group to which considerable attention has been given, some of the most effective strategies for reducing high-risk drinking include providing students with personalized feedback about their alcohol use in comparison with use by their peers, and training students to monitor and assess their alcohol consumption, identify personal drinking cues, develop alcohol refusal skills, and better manage their stress levels. Effective environmental interventions for college students include restricting happy hours, banning Sunday alcohol sales, enforcing drinking age laws, and increasing the cost of alcohol.

It’s also important to recognize that all of us can contribute to preventing excessive alcohol use. For example, you can:

What is alcohol use disorder?

According to the National Institute on Alcohol Abuse and Alcoholism, alcohol use disorder (AUD) is a medical condition that is characterized by an impaired ability to control alcohol use despite adverse social, occupational, or health consequences. AUD encompasses the conditions that some people refer to as alcohol abuse, alcohol dependence, alcohol addiction, and, of course, alcoholism.

Considered a brain disorder, AUD can range from mild to moderate and even to severe. Lasting changes in the brain caused by alcohol misuse perpetuate AUD and make many individuals vulnerable to relapse. Luckily, no matter how severe the problem may seem, evidence-based treatment with behavioral therapies, mutual-support groups, and/or medications can help those with AUD achieve and maintain recovery.

Healthcare professionals use criteria from the Diagnostic and Statistical Manual of Mental Disorders, Fifth Edition (DSM-5), to evaluate whether a person has AUD and to determine the severity if the disorder is present. Severity is based on the number of criteria an individual meets based on their symptoms; mild means 2-3 criteria, moderate is 4-5 criteria, and severe is 6 or more criteria.

A healthcare provider would likely ask the following questions to assess a person’s symptoms.

In the past year, have you…

Any of these symptoms can be cause for concern. The more symptoms, the more urgently change and treatment is needed.

What types of treatment are available for alcohol use disorder?

Several evidence-based treatment approaches are available for Alcohol Use Disorder (AUD). One size does not fit all; a treatment plan that may work for one person may not work for another. Treatment can be outpatient or inpatient, and may be provided by specialty programs, therapists, and/or doctors.

Three medications are currently approved by the U.S. Food and Drug Administration (FDA) to help people stop or reduce drinking and prevent relapse: naltrexone, acamprosate, and disulfiram. All three of these medications are non-addictive. They may be used alone or in conjunction with behavioral treatments or mutual-support groups.

Mutual-support groups provide peer support for reducing or stopping drinking. Group meetings are available in many communities at low or no cost and at convenient times or locations – including online, in the comfort of your own home! This means they can be especially helpful to individuals at risk for relapse. Combined with medications and behavioral treatment provided by health professionals, mutual-support groups offer a valuable added layer of support.

Many people with AUD do recover, but it’s important to keep in mind that setbacks are common among people in treatment. Seeking professional help early can prevent a relapse to drinking. Behavioral therapies can hel0p people to develop skills to avoid and overcome triggers that might lead to drinking. Medications can also help deter drinking during times when individuals might be at a greater risk of relapse.

According to the Centers for Disease Control and Prevention (CDC), excessive alcohol use, either in the form of binge drinking or heavy drinking, is associated with an increased risk of many health problems, such as liver disease and unintentional injuries. The Behavioral Risk Factor Surveillance System (BRFSS) survey in 2018 reported that more than half of the U.S. adult population drank alcohol in the past 30 days. Of those, 16% reported binge drinking, and 7% reported heavy drinking.

Course Highlight: Under the Influence

Under the Influence is a personalized, interactive alcohol intervention course that works for both adults and juveniles. Under the Influence is targeted towards individuals with high-risk drinking behaviors or alcohol violations, such as underage drinking, driving under the influence, or public intoxication. The course includes lessons that address topics such as alcohol’s effects on your health, drinking and driving, state-specific laws, and alcohol/prescription drug interactions.

Under the Influence utilizes the eCHECKUP TO GO brief intervention for alcohol, which includes a 30-day follow-up to measure changes in individuals’ attitudes and behaviors. Participants also receive a confidential drinking profile that summarizes personal drinking-related problems, compares their drinking habits with social norms, challenges their expectations, and provides a range of non-drinking strategies aimed at combating unsafe drinking practices.

For use with alcohol violations or as an intervention-based educational tool, Under the Influence is personalized for each student and integrates feedback through interaction. Students are empowered to identify goals that will help them make a positive change in their personal alcohol use.

Alcohol Wise is an online alcohol prevention program that educates students about the risks and dangers associated with drinking. Alcohol Wise has been used by over one million students across the country as an evidence-based tool to reduce high-risk drinking behavior. The program utilizes eCHECKUP TO GO as a brief intervention strategy, which has been proven to decrease excessive drinking patterns. Though this online course is short, it is extremely worthwhile, whether providing support to break the cycle of unhealthy drinking behaviors or providing education that will prevent someone from developing unhealthy drinking behaviors.

Alcohol Wise is a cost-effective program that reduces negative consequences of drinking. When implemented effectively, Alcohol Wise has the power to change campus culture for the better as it educates students about the harmful effects of alcohol. This will, in turn, raise retention rates while acting as a prevention tool for future alcohol-related violations.

Though this online alcohol class was originally designed for incoming first-year or transfer students as an alcohol prevention education program, the study’s findings were positive for college freshmen and sophomores alike, showing a statistically significant change in drinking behavior and attitudes among both groups. Alcohol Wise has even been expanded into a separate course offering that specifically targets middle and high school students.

With a proven track record of success, Alcohol Wise provides normative drinking information, harm reduction strategies, and alcohol education, while using motivational interviewing to provide personalized feedback to each and every student.

If you or someone you know needs help making a change in their alcohol use,
you can sign up for Under the Influence at our website 3rdmil.com/signup.

If you are interesting in providing Under the Influence, Alcohol Wise, or any of our
other prevention and intervention courses to your school, agency, or court offenders,
start by requesting a course demo today at 3rdmil.com/b2b.

Course Highlight: Under the Influence JV

What are the Signs of Alcohol Poisoning?

Signs of Teen Substance Use